Change on a Page – The Microbusiness Strategic Review

Change on a Page – The Microbusiness Strategic Review 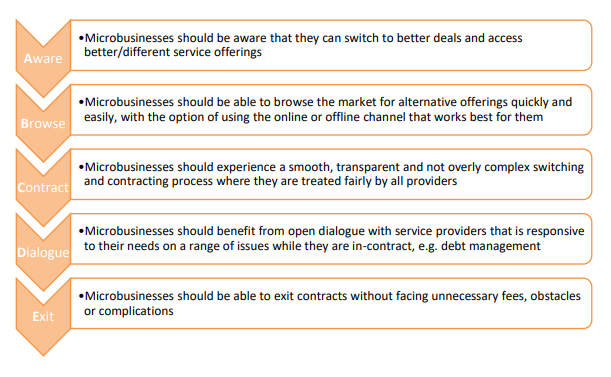 In July 2020, the regulator then consulted on an initial package of policy measures designed to uphold these principles.  This consultation response closed in October 2020.
June 2021: Final Reform Package Announcement

Having reviewed the consultation responses Ofgem have now (1st June 2021) refined their plans and are consulting on a “finalised package of measures” which will lead to a significant shake up of how suppliers and TPIs engage with microbusinesses. Subject to a consultation response (closing 9th July 2021), such changes will be reflected with revised clauses and new inserts into the standard licence conditions for both gas and electricity suppliers.

The first of these changes are due to be implemented in Autumnn 2021 with the final two measures, mandating Broker Dispute Resolution and supporting a 14-day contract cool off period, expected to be delivered in January 2022. 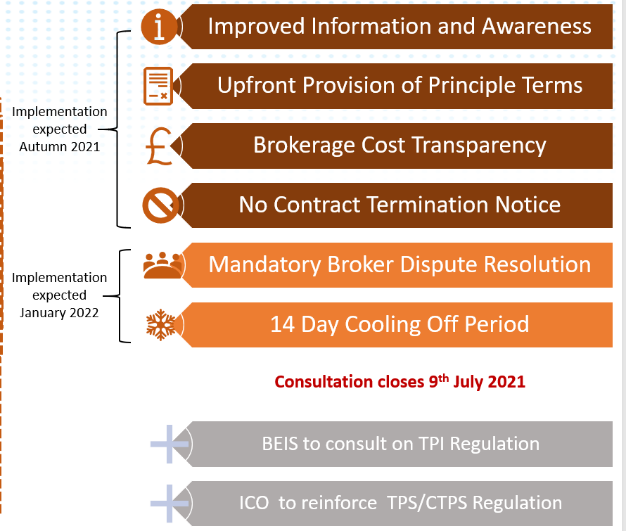 The concept of some form of ‘Broker Code of Conduct’, initially discussed by Ofgem, has been descoped in this final consultation following the government’s plans to consult on wider TPI regulation in the coming year, an announcement made by BEIS in last years Energy White Paper.

Subject to the consultation and Ofgem Final Decision, the key proposals are listed below, with a likely implementation for Autumn 2021:

Working collaboratively with Citizens Advice, Ofgem are seeking to create new and updated information so that microbusinesses can access up-to-date guidance and advice alongside communications to help further boost awareness of how the market operates and their rights as consumers.

Ofgem have proposed to strengthen existing rules around the provision of principal contractual terms to ensure consumers receive this key information both pre- and post-contract agreement in all cases.

7A.4: Before the licensee enters into a Micro Business Consumer Contract, it must bring, or ensure the relevant Broker brings, the following information to the attention of the MB consumer…:
(a) A statement to effect that the licensee is seeking to enter into a legally binding contract
(b) The Principal Terms of the proposed contract

7A.9 a (iii): (The licensee) must ensure that the Principal Terms are sent by it, or by the relevant Broker, to a MB no later than one working day after the Microbusiness Consumer Contract is entered into

Ofgem intend to clarify and strengthen existing supply license obligations to provide information about brokerage costs on contractual documentation, namely the principal terms, and further at any point on request of the microbusiness customer.

Under these proposals, suppliers will be banned from requiring termination notice to be provided by a microbusinesses or notice of their intent to switch once the initial contracted period ends.

Note: It is already CGP policy not to require termination notice in our Microbusiness contracts

Suppliers will be required to send a statement of renewal terms 60 days before the contract end date.

Note: It is already CGP policy to issue microbusiness renewal offerings at least 60 days before a contract end date.

Subject to the consultation and Ofgem Final Decision, the key proposals are listed below, with a likely implementation for January 2022:

Ofgem are proposing to introduce a requirement for suppliers to only work with TPIs who are actively signed up to a qualifying alternative dispute resolution scheme (“Qualifying Dispute Settlement Scheme”). Ofgem are not proposing to designate a single central scheme however, they note the work that the ombudsman services has already done to develop its Broker ADR scheme over the year.

Condition 20:
20.6A: “the licensee must ensure that any Broker is a member of a Qualifying Dispute Settlement Scheme.”
20.6B “the licensee must provide information it holds or controls… which is relevant to a dispute between a MB consumer and a broker…on request”

Ofgem intend to introduce a 14-day cooling-off period for microbusiness contracts and suppliers will be required to provide clear terms to inform microbusiness of their right to cancel. Notice of cancellation can be provided to a supplier and the license allows a MB to cancel for any reason.

Next steps: The Consultation closes on 9th July in which a final Ofgem decision is expected in the Autumn.