Smart Metering Roll Out: Plan B

The end of 2020 will of course bring with it the deadline for suppliers to take all reasonable steps (ARS) to ensure that a Smart Metering System is installed in a domestic or microbusiness premise. Facing up to the reality that the Industry will be well short of the mark, the department for Business, Energy and Industrial Strategy (BEIS) are now looking at the post-2020 smart meter rollout arrangements. In a consultation which has just closed, BEIS proposes to remove the “all reasonable steps” framework which is the hallmark of the current policy, replacing this with a legally binding requirement for suppliers to meet annual milestones. In its consultation BEIS propose that a supplier will need to ensure that at least 85% of its qualifying portfolio has a solution by the 31st December 2024 (a solution either in the form of a Smart or Advanced meter depending on the meter size and/or choice of the non-microbusiness consumer).  In a separate Ofgem consultation, the regulator proposes that all suppliers would report publicly their performance for the previous year as well as publish their future milestones.

The assertion made by BEIS is that in little over a year all the technical issues associated with Smart Meter installations will be overcome. For the non-domestic market, the main technical issues relate to; the availability of dual band communications hubs (a solution for those premises where due to geographic distance the gas meter falls outside of the range of a standard communications hub); connectivity issues for those premises located within the northern parts of the UK; the absence of a three-phase Smart Meter to satisfy the electrical arrangements typically found within the majority of microbusinesses; and challenges associated with single fuel gas suppliers (“gas-first installations”) for a programme which was designed with dual-fuel suppliers in mind. The challenges expressed here should not be read as suppliers at odds with the programme, this is far from the case. Ask any energy supplier whether or not they support the programme and you will receive a positive response. The data such devices bring allow for potential energy and monetary savings to be made by the consumer (and supplier) whether that be due to accurate billing or active energy saving techniques the consumer has employed as a result of monitoring their consumption. Yet, for the post 2020 framework to be drafted in a way which suggests that all of the above issues will be resolved is remarkably ambitious.

Rightly or wrongly the current ARS approach provides both a practical and flexible solution for a non-domestic supplier, particularly in overcoming those technical issues which invariable crop up (including those situations whereby a consumer point blankly refuses to have one).  The abandonment of ARS with the introduction of a hard target could give rise to more coercive tactics used by energy suppliers – installing such equipment under warrant is not the future image that the programme needs.  A hard target may also encourage some suppliers to do the bare minimum number of installations – once achieved there is no further incentive to install more meters which may be to the detriment of those consumers who may be expecting. Furthermore, the target makes no allowances for the difference between the domestic and non-domestic markets.  A non-domestic supplier with a portfolio predominantly made up of three-phase micro business customers is more disadvantaged than a large domestic supplier with a large volume of domestic non-prepayment meters. It will therefore be interesting to see what (if any) adjustments BEIS makes on their minded to position once the consultation responses have been considered.

Picking up from where we left this topic in our previous newsletter, the regulators review of supplier licensing arrangements has entered its next (and probably most significant) phase. In its consultation which opened in October, Ofgem propose a number of reforms which would allow them to monitor whether existing licensees have both the operational and financial capability to supply and serve current and future customers. Furthermore, the consultation looks at increasing individual accountability within organisations and would also require suppliers to introduce living wills to facilitate an orderly market exit. 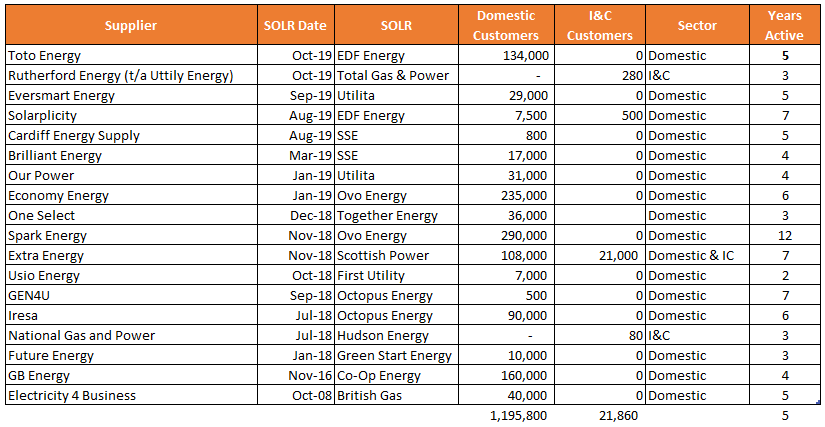 The objective of such proposals is to of course limit what is now a steady stream of supplier failings. Indeed, since our last newsletter the industry has seen five further exits to the displacement of around 172,000 consumers. The table shown here makes for disappointing reading.

That aside, the proposals hope to drive up performance standards throughout the industry and enable Ofgem to get an early warning for those licensees where it suspects that trouble could be looming.  At a high level such reforms would include:

The proposals (and more) are subject to industry feedback, which also includes a supplier workshop at the end of November. Given the mixture of intervention and complexity it is likely that such proposals will evolve from their current state. Time will of course tell us whether such reforms have acted as the plaster or the cure for the retail market.

The Christmas period is often a favourite time for the government and regulator to consult with industry.  It is anticipated that this year will be no different if (and given the current political climate it’s a relatively big “if”) the indicative timetable for consultation previously shared with industry doesn’t go astray. For starters it is anticipated that Ofgem will publish its policy proposals relating to microbusinesses. Since its call for evidence closed back in June this year, the regulator has been analysing its information gathered and engaging with industry groups (including Third Party Intermediaries) in order to finetune what could be quite significant reforms with how suppliers (and perhaps TPIs) interact with consumers. We may be able to get an idea of the regulators state of mind from its latest State of the Market Report (October 2019), where its research highlights that market engagement for microbusiness is difficult due to the “the high number and complexity of tariff options, the widespread practice of negotiation and the reliance on brokers.” With higher search costs felt and longer complaint resolution times experienced (when compared to domestic complaints), such factors will likely loop back into its wider policy ideals.  As such areas which industry will keenly be looking out for include:

If such proposals are published the journey from paper to practice could take anything of up to a year to realise.

As for the Future Energy Market Review (of which the microbusiness review will feed into), the governments summer consultation closed on 16th September. The desire back then was to consult on detailed options in this side of winter, although the extent to which this is now possible is looking uncertain. One aspect which seemed to be hooking into the review was the Energy White Paper, however news of its imminent released has quietened down somewhat although its assumable that this will likely jump back up the agenda when some sort of political stability is achieved.

As reported in our Summer newsletter, several industry modifications were raised earlier in the year aimed at improving energy suppliers meter read provision, reading performance and improving the quality of certain meter point data items held on the central industry system. Whilst no single modification claims to be the silver bullet to fix the uncertainty attributed with Unidentified Gas (UIG), the collective ambition is that together each change will positively contribute towards improving its predictability and stability (and hopefully) volume. As things stand daily UIG levels will likely get worse before they get better. Following up on a previous warning to the industry, Xoserve confirmed that daily UIG levels had increased since the 1st October as a result of refinements made to energy allocations which will likely see UIG increase in colder months and reduce in the summer.

The suite of modifications will continue to progress through their respective workgroups, with the majority of them reporting their proposals to Industry in December.  Owing to their complexity and likely material impact that will be felt on the supplier community if implemented, the prospect is that such development will continue well into the new year.